Playing by the Rules: Dutch Leader Offers a Sober Contrast in a Brash Era

Practice what you preach. De NY TImes over Mark Rutte. 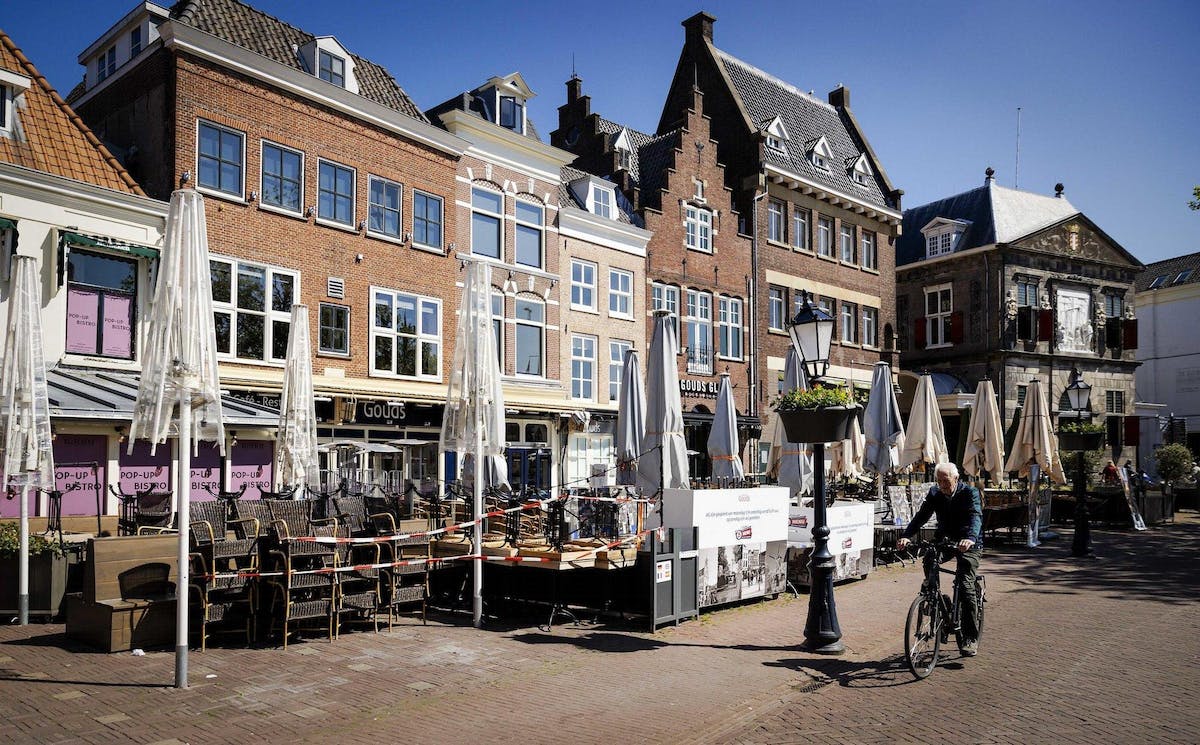 Closed terraces in Gouda this month. Holland imposed a lockdown on March 20.

At a time when populists are overturning social norms, Prime Minister Mark Rutte did not visit his mother in the weeks before her death. It was against his country’s policies.

AMSTERDAM — He likes to ride his bicycle to the office. If time is an issue, he opts for the aging Saab parked in front of his modest apartment in The Hague.

He pays for his own coffees and refuses any reimbursement for costs incurred on duty. When attending public events, he stands in line with everyone else. At the rave festivals he enjoys, he dances among all the others.

In an era of brash populists thumbing their noses at laws and customs, Mark Rutte, 53, the prime minister of the Netherlands and one of the longest-serving European leaders, believes in playing strictly by the rules.

The Dutch electorate is so accustomed to his humble ways that few people blinked an eye when Mr. Rutte said this week that, in accordance with Dutch policies on the coronavirus, he had not visited his 96-year-old mother in a nursing home in the weeks before her death.

Around that same time, a firestorm was erupting in Britain over trips made by Dominic Cummings, the top adviser to Prime Minister Boris Johnson who drove 260 miles to his parents’ house in apparent defiance of lockdown rules. Jaroslaw Kaczynski, the leader of Poland’s governing Law and Justice party, was visiting the graves of his mother and twin brother when the cemeteries were closed.

And in the United States, as deaths from the virus approached 100,000, President Trump was spreading a false accusation of murder against a rival, playing golf, refusing to wear a mask and fighting with social media platforms after Twitter applied fact checks to unsubstantiated claims in his posts.

Mr. Rutte (pronounced ROOT-uh) gave a brief statement on Monday, saying that his mother, Mieke Rutte-Dilling, had died two weeks earlier. “We have now said goodbye to her in private and hope to be able to deal with this great loss in peace in the near future.” 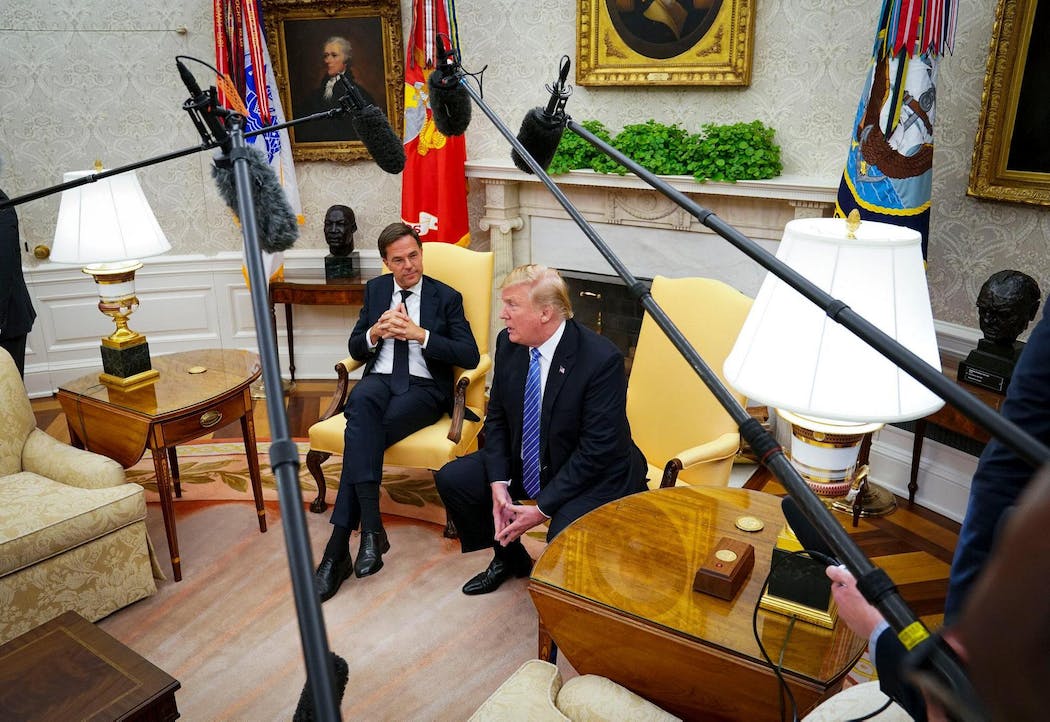 Mr. Rutte is known for plain speaking, as in this meeting in 2018 when he contradicted President Trump on trade issues.

In his statement, Mr. Rutte did not refer to having been unable to visit her since March 20, when the Netherlands imposed a lockdown. In keeping with Dutch policies, he was able to stay with her on her final night, his office later explained.

In the hours after her death, the prime minister gave his regular virus-related news briefing and led a government meeting on the crisis.

“He would never want to be seen as trying to get a political advantage out of something so personal,” said Gerdi Verbeet, a former speaker of the Dutch Parliament and a member of the rival Labor Party, or PvdA.

There is a saying at the heart of Dutch culture: “doe maar gewoon,” or “just be normal.”

“This expression matches his personality,” said Tom-Jan Meeus, a political columnist for the newspaper NRC Handelsblad. “He is an old-fashioned Dutchman, no frills.”

Mr. Rutte, who leads the center-right People’s Party for Freedom and Democracy, does not play to the crowd, nor does he worry about keeping a politically crafted image, people close to him say.

“He is the most sober of all European national leaders. He owns very few personal possessions, has zero interest in material things and literally lives 24/7 for his work,” said Diederik Samsom, a former Labor Party leader who led a coalition cabinet together with Mr. Rutte. “Living like this, he will never encounter issues like the one Mr. Cummings faces now.”

In keeping with an image that many Dutch people celebrate as a national trait, Mr. Rutte cherishes straight talk. When he met with Mr. Trump in the White House in 2018, he interrupted the president after Mr. Trump said that a failure to reach a trade agreement with the European Union would be “positive.”

Mr. Rutte’s father, Izaäk Rutte, who ran a trading company, became a widower after his wife died in a Japanese-run internment camp in Indonesia, a Dutch colony. He remarried his deceased wife’s sister, Mieke, who gave birth to four more children, Mark being the last, in 1967. 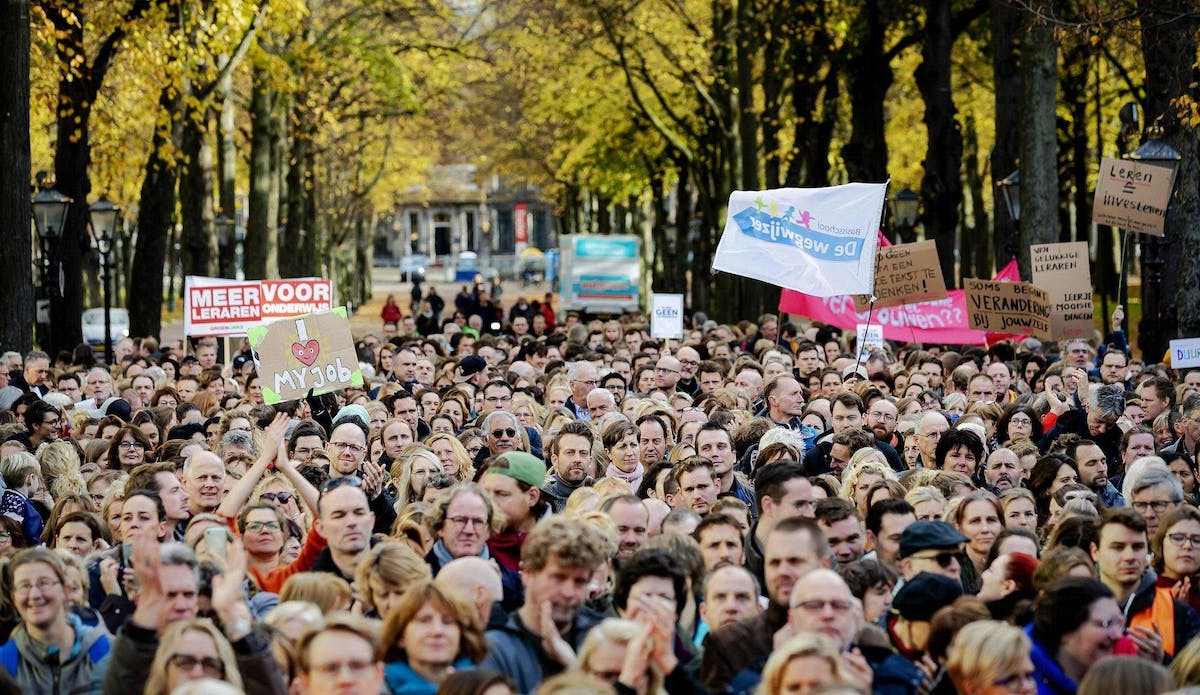 Teachers protesting in November to demand extra structural investment in education. As a fiscal conwervative, Mr. Rutte has been criticized for  squeezing the salaries of nurses, teachers and farmers.

As the youngest of seven children, he was always very close to his mother, whom he visited at least once a week. He never married.

He attended an elite secondary school in The Hague and while he could have studied piano at the conservatory in the same city, he opted instead to study history in college in Leiden.

Mr. Rutte quickly rose through his party’s ranks while working for the Dutch-British conglomerate Unilever as a manager responsible for training and education. His no-nonsense approach to politics has led Mr. Rutte to steer the Netherlands away from its longtime cradle-to-grave welfare state.

While the economy has thrived, critics have scolded him for squeezing the salaries of nurses, teachers and farmers.

A free-spirited country known for its tolerance, the Netherlands has grown increasingly businesslike and conservative. This month, for example, the government reversed its traditional stance on refugees by refusing entry to 500 orphans stuck in camps in Greece.

Internationally, Mr. Rutte has recently taken a more prominent role in the debate over the next European Union aid package. His government has been a vocal opponent of a 750 billion euro, $826 billion, aid package for virus relief that would, for the first time, involve the sharing of debt among the bloc’s countries.

He does like to play with his lesser-than-life image. When in 2018 President Emmanuel Macron of France visited his office, located in a tower on a corner of the Dutch Parliament complex, Mr. Rutte boasted to the French leader about its size. “It’s small, but at least I have a view,” he said.

Mr. Meeus, the political columnist, joked that “Macron must have thought this was the entrance instead of the office of a European leader.”

With parliamentary elections scheduled for next March, Mr. Rutte’s popularity and that of his party are at a peak, affording him the chance to claim a fourth four-year term, which would make him one of the longest-sitting political leaders of the Netherlands. (The country is officially run by a monarch, King Willem-Alexander van Oranje.)

Mr. Rutte’s popularity also poses a danger, said Ms. Verbeet of the Labor Party. “He’s becoming larger than his party,” she said. “This means that among his supporters it’s difficult to criticize him.” 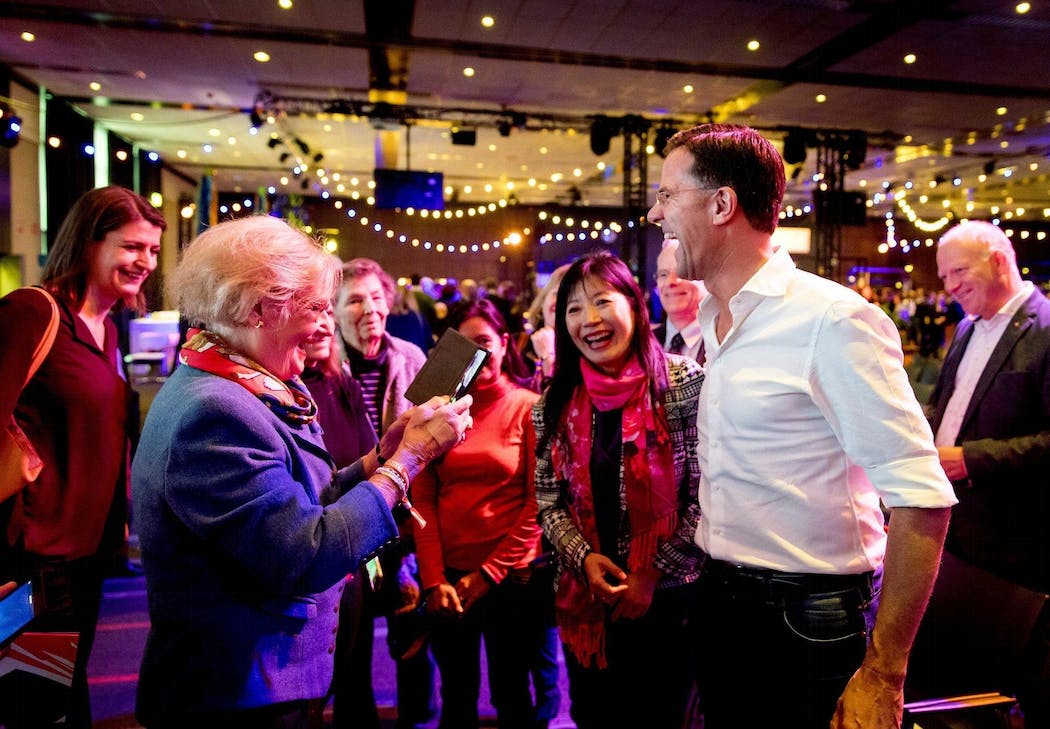 At a general meeting of the People’s Party for Freedom and Democracy (VVD) in November. Mr. Rutte and his party are at the peak of their popularity.

Since no party in the Netherlands has an overall majority in the 150-seat Parliament, Mr. Rutte always needs to compromise with other parties to form coalitions.

This approach is so ingrained in Dutch politics, there is a name for it: the “poldermodel,” with polder meaning “land reclaimed from the sea.” That reflects the origins of Medieval Dutch society, which came together to build dikes and canals so the land could be livable.

“That effort brought about a collectivist instinct, since everyone had to work together — otherwise all would be under water,” said Russell Shorto, an American author who wrote a history of Amsterdam.

“Likewise, the poldermodel values consensus,” Mr. Shorto added. “And if you consider that there are about a dozen political parties, and Mark Rutte has been in power for 10 years, it’s clear that he has proved himself to be a master at building and maintaining consensus.”